The 4th largest basin in the Philippines and covers an approximate aggregate area of 10,540 sq. km. (includes the allied basin of Guagua River). The basin extends over the southern slopes of the Caraballo Mountains, the western slopes of the Sierra Madre range and the major portions of the Central Plain of Luzon. It encompasses the provinces of Nueva Ecija; part of Bulacan, Tarlac and Quezon; and almost whole of Pampanga. The total length of the main river, the Pampanga River, is about 260 kilometers.

The basin is drained through the Pampanga River and via the Labangan Channel into the Manila Bay. The main river is supported by several tributaries, the principal ones of which are the Penaranda and the Coronel-Santor Rivers on the eastern side of the basin and the Rio Chico River from the northwest side. The Angat River joins the Pampanga River at Calumpit in Bulacan via the Bagbag River. The Labangan channel, on the other hand, acts as a cut-off channel for the Angat River into Manila Bay. Somewhere between the middle and lower portion of the basin stands Mount Arayat, about 1,026 meters in elevation. Adjacent to Mount Arayat, across Pampanga River, just on the eastern side is the Candaba swamp, covering an area of some 250 sq. km. absorbing most of the flood flows coming from the eastern sections of the basin (western slopes of a portion of the Sierra Madre mountain range) and the overflowing of the Pampanga River via the Cabiao Floodway. This area is submerged during the rainy season but is relatively dry during summer. At the lower sections of the basin, where the Pampanga delta lies, the Pampanga River system divide into relatively small branches, crisscrossed with fishponds to form a network of sluggish, tidal flats and canals, which eventually find their way to Manila Bay. The main river has a relatively low-gradient channel particularly at the middle and lower sections. With the anticipated completion of the Pampanga Delta Project (DPWH), it is expected that floodflows at the lower section of the Pampanga River will recede at a much faster rate than before.

The basin experiences, on an average, at least one flooding in a year. The dry season generally occurs from December to May, and wet the rest of the year. The wettest months are from July to September. The frequency of tropical cyclone passage over the basin is about 5 in 3 years. 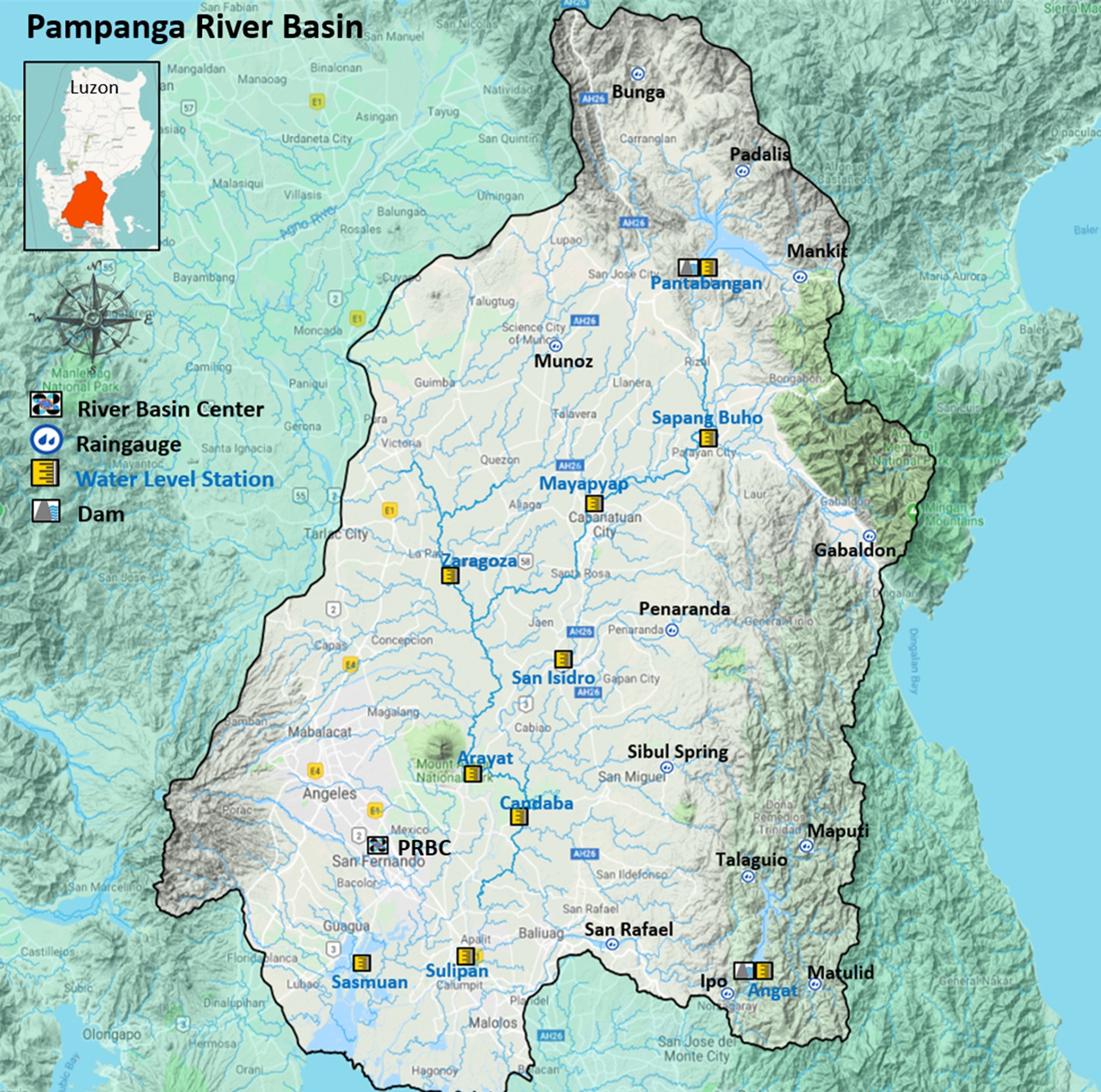 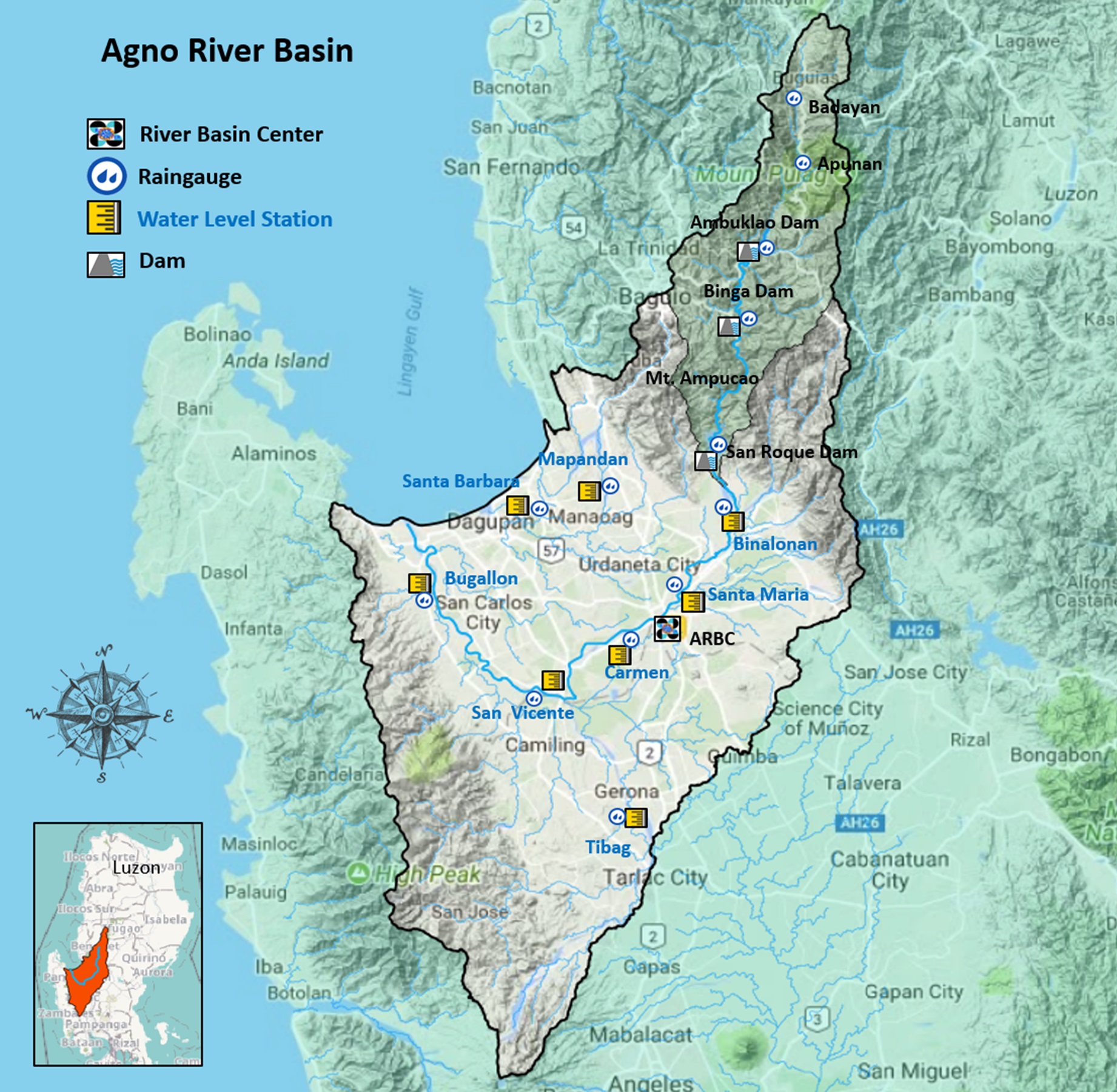 The Agno River, with a drainage area of 5,952 square kilometers is the third largest river in Luzon, fifth in the Philippines, next to the Cagayan and Pampanga Rivers. The length of the river system from its source in the Cordillera Mountains to its mouth in Lingayen Gulf is about 270 kilometers, 90 kilometers of which runs through mountainous terrain and canyons.

The Agno River after passing through mountains at an average elevation of some 2,000 above MSL, forms a vast alluvial fan and delta called the Pangasinan Plain and then flows into the Lingayen Gulf. The Pangasinan plain has long been economically developed and together with the Pampanga Plain constitute the rice granary of Central Luzon. Principal tributaries of the Agno River include the Pila, Camiling, Tarlac and Ambayoan Rivers. The main branch of the Agno River is Tarlac River which has its source at Mt. Pinatubo (elevation 1,745m) in Tarlac and joins the Agno River at Poponto Swamp near Bayambang. The swamp has an area of about 25 square kilometers and temporarily retains flood waters from the Tarlac River. Since the Agno River basin is characterized by mountainous topography, the flood runoff estimated annually at about 6,654 million cubic meters reaches the plain in several hours in the river mouth in about a day. Average annual rainfall varies from 2,000mm in the neighborhood of Tarlac to 4,000mm in the upper reaches of the Agno River. Such great variation in the area distribution of rainfall is attributed to orographic effect coupled with tropical cyclone and south-west monsoon rainfall.

The Pangasinan Plain suffers from recurrent and destructive floods. The catastrophic floods of July-August 1972 and May 1976 inundated the entire Pangasinan Plain including the flood plains of the Tarlac River.

The target areas for this flood forecasting and warning subsystem are:

a) The entire Pangasinan Plain including the major city/municipalities of Dagupan, Lingayen, Bugallon, Sta. Barbara, Bayambang and Rosales

b) The central part of Tarlac province including the municipalities of Gerona, Tarlac, Paniqui and Moncada.

The Bicol River is a medium-size river in Southern Luzon and drains an area of 3,771 square kilometers. Situated in the Bicol Peninsula, it embraces the central portion of Camarines Sur, the northern portion of Albay, and a portion of Camarines Norte. The basin is oriented in a northwest-southeast direction and bounded on the east by a chain of volcanoes and on the west by highlands and lowhills. The flat alluvial land in the Bicol Plain occupies the area between the Eastern Bicol Cordillera and the Ragay Hills.

The runoff which is estimated annually at 5,100 million cubic meters, starts from the Mayon Volcano with an elevation of 4,421m, and meanders in a generally northwestward direction. After being regulated through lakes Bato, Buhi, and Baao, the streamflow reaches the mainstream of the Bicol River which owing to its very gentle slope, is affected by tides as far as upstream of Naga City.

The principal tributary of the Bicol River is the Sipocot River. Unlike the main river, the Sipocot River cuts through mountainous terrain and has a steeper slope. The Bicol River after joining the Sipocot River, widens to more than 1,000 meters across at the estuary before discharging into San Miguel Bay.The average annual rainfall varies from 2,000mm in the southwestern area to 3,600mm in the southwestern section of the basin. Flood-producing rains in the basin from May to February are mainly due to tropical cyclone passages, northeast monsoon and orographic effect.Flooding from the sea in the alluvial plain near the mouth of the river is caused by storm surges associated with the passage of slow-moving typhoons near or over San Miguel Bay particularly during high tides.The target areas for the Bicol River Flood Forecasting and Warning Subsystem are:a) The Central part of the basin, from lake Baao to Lake Bato.b) The alluvial plain extending from Naga City to the river mouth. 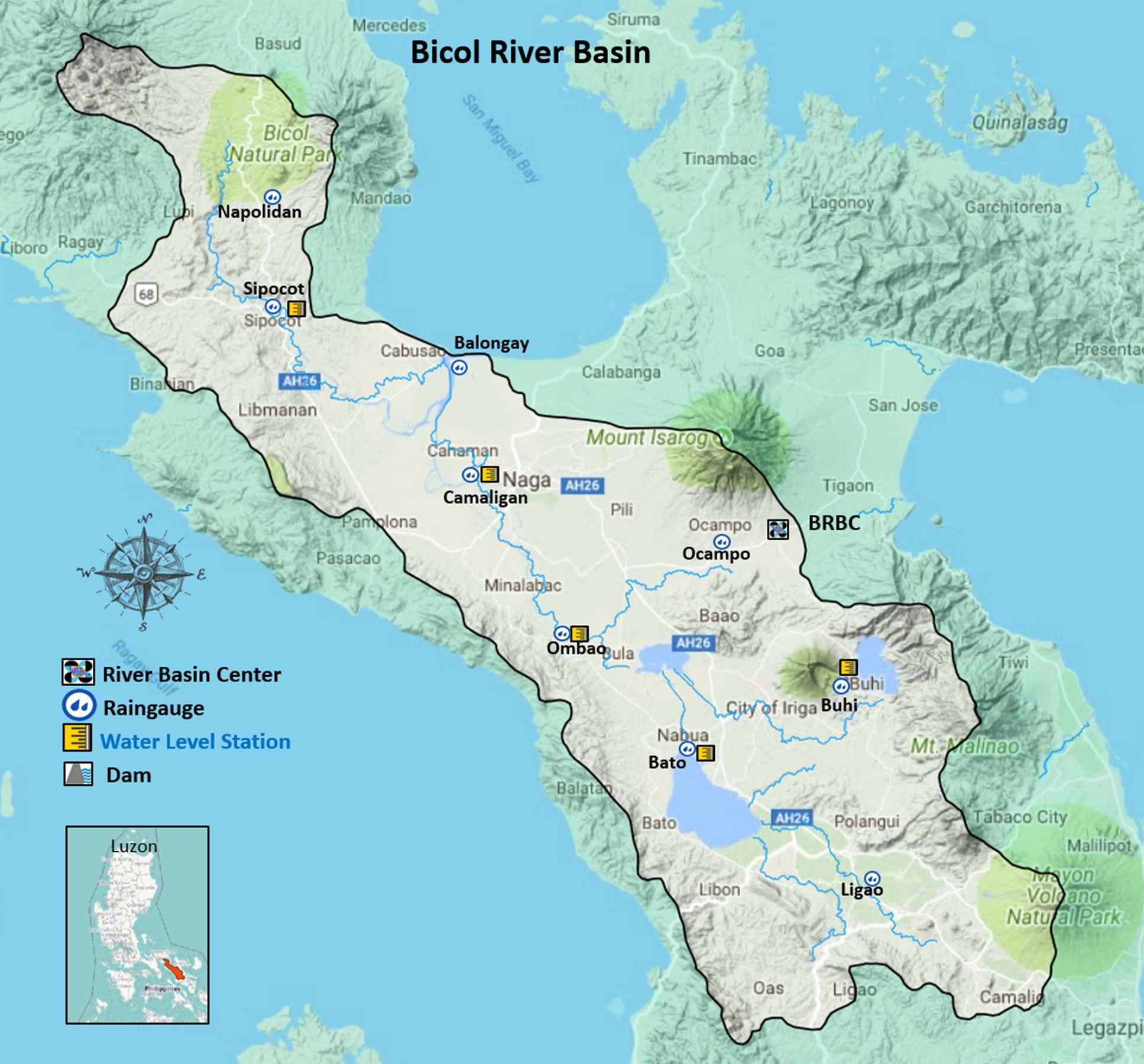 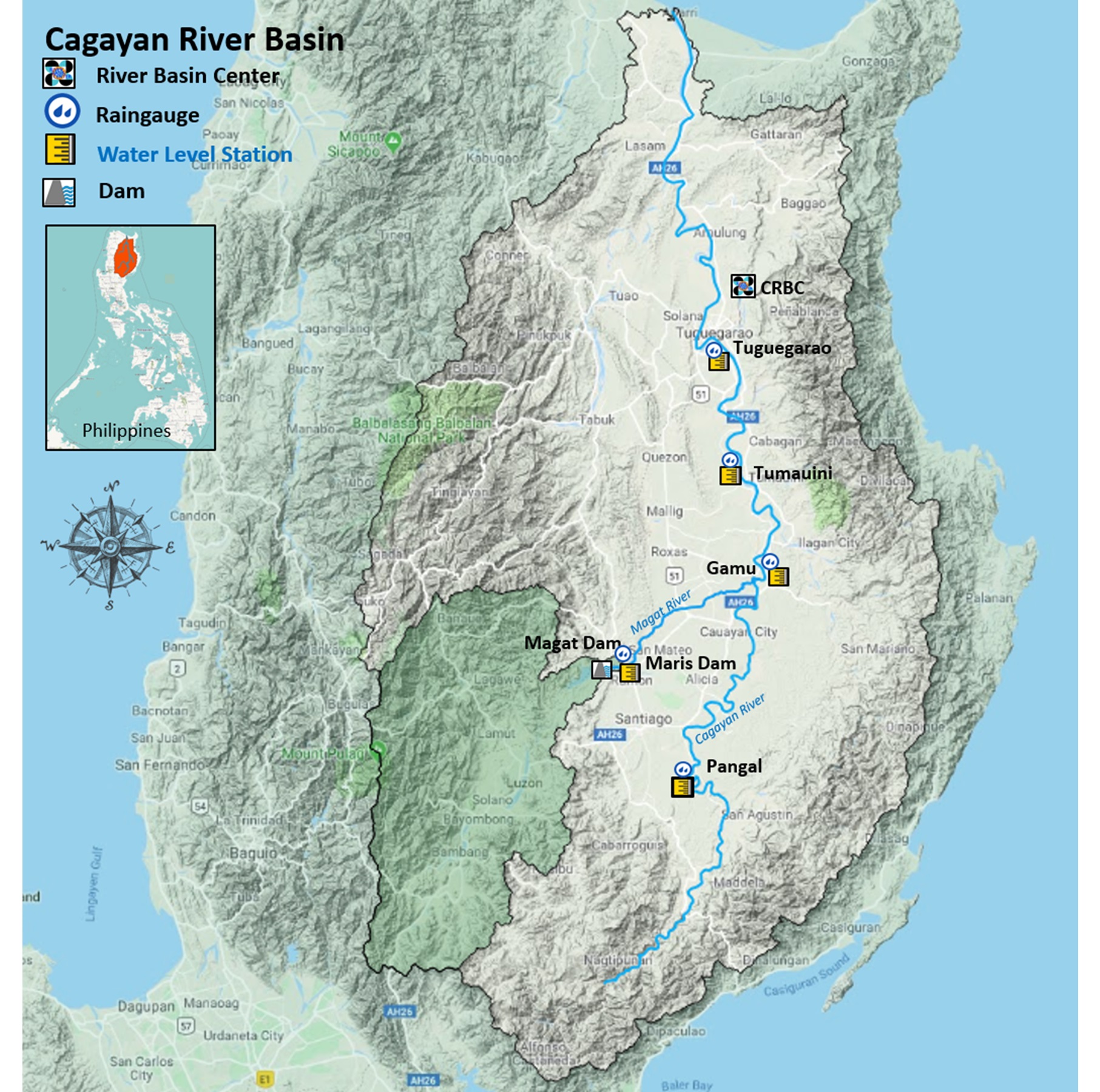 The Cagayan River is the largest river in the Philippines with a drainage area of 27,280 square kilometers at its mouth in Aparri.The basin encompasses parts of Cagayan, Isabela, Mountain Province, Nueva Vizcaya, Quirino and Quezon Provinces. The basin is roughly elliptical in shape with its major axis oriented in a north-south direction. The Cagayan Valley is relatively flat but mountains with elevations up to 2,000m surround the east, south and west of the drainage basin.

The Cagayan River, which is the main drainage channel of the basin, flows in a northerly direction from its head waters in Nueva Vizcaya to its mouth in the Babuyan Channel near Aparri. Its principal tributaries include the Siffu-Malling, Chico, Ilagan and Magat Rivers. The estimated annual discharge is 53,943 million cubic meters.The Magat River is the largest tributary with an estimated annual discharge of 9,808 million cubic meters. It lies in the southwestern portion of the basin, stretching approximately 150 kilometers from Nueva Vizcaya down to its confluence with Cagayan River about 55 kilometers from the river mouth. Both the Magat and the Chico Rivers have extensive drainage areas which comprise about 1/3 of the whole basin. The Ilagan River originates from the western slopes of the Sierra Madre and drains the eastern central portion of the Cagayan River basin with an estimated annual discharge of 9,455 million cubic meters. It flows westward and joins the Cagayan River at Ilagan, Isabela, 200 kilometers from the mouth. The Siffu-Malling River lies on the slope of the Central Cordillera ranges flowing almost parallel to the Magat River. Marshes and swamps are found in some parts of its lower reaches.The average annual rainfall in 1,000mm in the northern part and 3,000mm in the southern mountains. Floods caused by this river flow down very slowly because of surface retention over the extensive flood plain, extremely gentle slope, retardation of flood by several gorges and river meander.The target areas for the flood forecasting and warning system of the Cagayan River Basin are:a)The areas along the lower reaches, from Tuguegarao to Aparrib) The alluvial plain along the river course from Ilagan to Tumauini, Isabela.